Blog - Latest News
You are here: Home / You want to run a Mustang in the 24 hours of Lemons? Good luck. 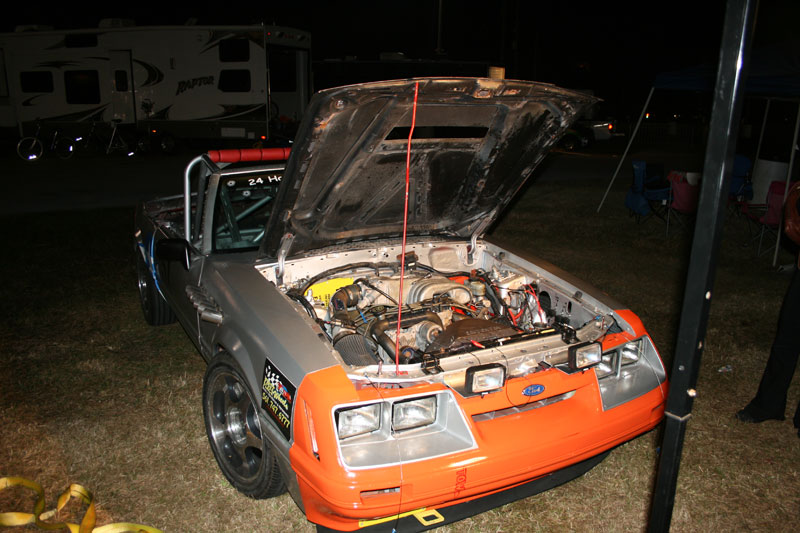 What does it take to build and run a nostalgic POS  in the ultimate WTF?

It’s easy to talk yourself into something familiar. In our case we knew so much about the FOX platform it somehow equated to an unfair advantage in our minds. It turned out to be an unfair advantage, but not the way we anticipated.

So. What happens when a group of friends decide they are going to act on a really dumb idea: Enter a tired, 180,000 mile LX 5.0 Mustang in the 24 Hours of Lemons? Oh brother. This is the first installment of everything we learned (and some things we didn’t) about running a POS in a WTF!

There really wasn’t much of a choice in the ‘car selection process’ when we entered the 24 Hours of Lemons (24HoL.) Our core team members are/were good friends. We’d done a lot of wrenching on each other’s cars over the years – and most of that experience was on one vehicle, the Ford Mustang. Specifically, we’d been taking apart, modifying and recreating the Fox bodied (SN95 cars included) Mustangs for years. If we stood any chance at completing a ridiculous 24-hour endurance race with a car limited to a $500 budget we’d have to go with what we knew. Or what we thought we knew.

To be competitive, it is insane to enter a small block Ford V8 – especially one with 180,000 miles under it’s belt. They have a reputation for blowing head gaskets and power steering pumps during cheap-ass endurance racing. If we were smart (LOL) we’d select a car that was small, lightweight, and nimble – something that would sip gas and zip through corners. Screw that. We never really planned on being competitive (well, not at first – more on that later) we just wanted to have fun. So, ignoring the smart route, we opted for a tired old 5.0 LX convertible named Red.

We chose a convertible for the world’s most voluntary admission of intellect deficiency.

You don’t realize how much being stupid hurts – until the swelling goes away.

Red has history. This car has been around the block. Once upon a time he was a beautiful street-cruiser, and a part time Autocrosser, Red always turned heads, and was reliable. Three of our team members had used him as a daily driver over the years. Unfortunately, those years were not kind. Red was thrashed, wrecked, stolen/returned, and always exposed to a relentless south Florida environment. During his retirement, hidden areas of rust and other chassis cancers developed, prohibiting a much-deserved restoration. He was a perfect ‘donor’ – an honored soldier willing to become a Lemon racer – it was a Viking funeral for an old friend. Little did we know how appropriate that metaphor was.

We love the sight of a V8, and are happy to champion the tried and true 302 regardless of potential cooling issues that may await.

Red fit the rules for Lemons because he was old and tired enough to justify a low sales/purchase price between friends – many similar cars on Craigslist were going for $700-900. The rules for 24HoL are pretty simple. The total price of the car (minus the stuff you can sell) can’t exceed $500. For 24HoL you have to bring enough documentation to justify – in front of a panel of very, very cynical judges (judges that know WAY more about cars than you do BTW) that you honestly, without a doubt, only have $500 invested in the car. Penalties of death await those that try to cheat (more on this later.) This budget doesn’t include wheels, tires, safety gear, or brakes. EDITOR’S NOTE: Besides having some significant handling issues, the biggest problem with racing a Fox Mustang is the brakes. The brakes are pathetic. If the rules required the brake budget to be included in the $500– there is zero chance we would have selected a pre-94 Fox Mustang (we would have gone with a SN95 Mustang.) However, Red had some decent interior pieces that we could sell on ebay to offset the costs for a new timing chain, gaskets, and oil pump shaft. Stuff you’d expect to cause problems during a 24 hour endurance race.

Great. We had a car. Now we needed a team.

In our next installment, well explain how you can enlist help from well-intended people that have absolutely no idea what dread/elation awaits them.