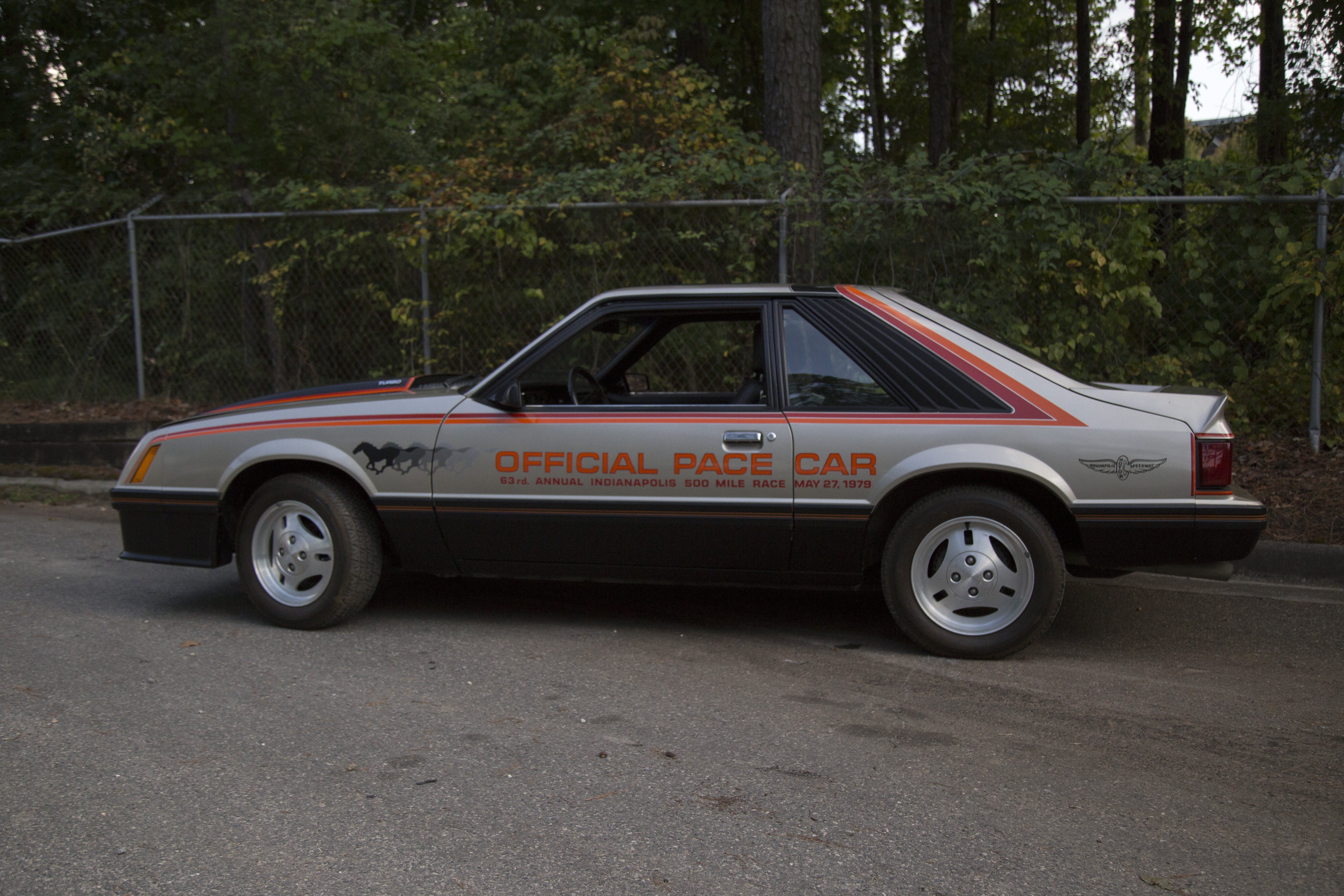 1979 was a very exciting year for Mustang fans. The Fox chassis was used to launch the third generation Mustang – a cult-favorite in the making that would leave its mark on the Muscle Car scene for years. But first, something special happened. The Mustang was selected as the pace car for the 63rd running of the Indy 500.

The Mustang hadn’t been selected to pace Indy since 1964. Three official pace cars were created for track duty. These cars looked identical to the replicas available for sale in every way except for a T-Top, (fitted by Cars and Concepts) an option that wouldn’t be available from the factory until the 1981 Mustang. They used specially prepared 5.0L V8 engines modified by Roush Industries using a Holley carb, aluminum high-rise intake, and 351 Windsor heads. The engine breathed through 1.84 intake / 1.54 exhaust valves with 289 HiPo springs and the 1970 Boss 302 solid lift cam. Internals included 1969 Boss 302 connecting rods, forged-steel crankshaft, and forged aluminum TRW pistons with Speed Pro rings. All pace-duty cars used modified C-4 automatic transmissions.

Jackie Stewart piloted the actual Mustang pace car for the start of the 1979 Indy 500, while Jim Rathmann took over pacing duties during caution periods throughout the race. Later the same year two of the three pace vehicles were re-styled for use in the Detroit Gran Prix. White paint was shot over the factory Pewter Polly and a new graphics package was applied. These original pace cars still wear the colors from the Detroit race, and are housed in a warehouse at Roush awaiting restoration.

1979 Mustang Pace Cars for Sale to the Public

The 1979 Mustang Pace Car replica was available to the public at a base price of $9,012 and $9,953 fully optioned. The car was only available as a hatchback (standard trim – non Ghia) and offered a choice of two engines and transmission options. The 302ci 5.0L was carried over from the Mustang II and available with a 4-speed manual or 3-speed automatic transmission. The 5.0L V8 produced 140 hp and 250 ft-lbs of torque. New for 1979 – the Mustang Pace Car was also available with the 2.3L Turbo four-cylinder using the 4-speed manual transmission. This combination provided 131 hp and 142 ft-lbs of torque. All Pace Cars used a 3.45:1 rear ratio 7.5” differential without trac-loc.

The Mustang Pace car distinguished itself from all other trim levels available in 1979. The front spoiler housed Marchal fog lights in a wide-mouthed lower radiator opening – flanked on each side with brake duct vents.

The aggressive lines of the newly designed Mustang were further exaggerated by the use of a two-tone paint scheme. (Ditzler/PPG Codes 33369) Pewter Polly every thing above the side molding and (9381) Flat black for the hood, top stripe, and lower half of the car. This color combination resulted in a car that both looks fast standing still – and quite exotic for its time.

Decals were worn on the hood – and side of the car. The hood wore the badge ‘MUSTANG’ in 10” tall, two toned lettering. The side of the car had “Official Pace Car” “63rd Annual 500 Mile Race, May 27 1979” with 4 graphic mustangs at the lead and the Indianapolis Speedway logo at the rear of the car. Bold stripes – Red and (2915) Vista Orange accent the hood, c-pillar, and taillights – while bright orange stripes accent the black side molding.

The rear spoiler for the 1979 Mustang Pace Car must be one of the most unique, and most functional looking ever made for a fox hatchback chassis. The leading edge follows the graceful line of the c-pillar – meeting at an aggressively angled duckbill that extends beyond the width of the vehicles upper silhouette.

Recaro seats were standard on the 1979 Pace Car and available in many different trims – the most awesome being the Houndstooth. Nothing said “Farwell 70’s, it was groovy knowing you” quite as well as this seizure inducing pattern.

Does a Turbo 4 Cylinder Belong in a Mustang?

10 Things About Your Next Mustang